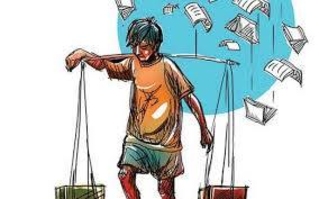 Child labor has become a frequent occurring in every corner in the world. This dangerous habit is also present right here were we live, in Kosovo. Thousands of children aged up to 14 years in Kosovo, work very dangerous jobs; in addition to that, they live in extreme poverty where they suffer psychological and physical violence. According to data collected by Kosovo institutions, 32.8 percent is the level of child poverty in Kosovo, within the 30 percent of total poverty that is estimated to be at Kosovo. While 10 percent of Kosovo children are involved in work, 6.8 percent of children work in hazardous conditions and 61.4 percent of children have suffered psychological and physical violence before reaching the age of 14. In addition to that, around 70,000 children in Kosovo live at 90 cents per day, meaning that it they live before the poverty line.

Fatima is 14 years old. She lives in Fushë Kosovë / Kosovo Polje and belongs to the Roma community. She has finished just fifth grade, but she did not continue her education. Although she is a child, she works seven days a week, spending 15 hours a day on the crossroads, cleaning the windshields of cars. She says that she takes all the money back home, where she lives with her other eight family members. Since she is the largest family child, she is obliged to work. Regardless of age, Fatima feels herself as an adult rather than a child. "I'm not a kid. I'm 14 years old. I also work to earn up to 10 euros a day. The job I do is clean the car windows. All the money gain, I send it home. We are six children. Only me and my father work. The father collects glass bottles and cans that he sells. With the money we earn, we live, "Fatima said. Children such as Fatima, who are forced to stop education and engage in work, are quite frequent in Kosovo.

Meanwhile, in the Roma community, this phenomenon is more pronounced. Non-governmental organizations dealing with the protection of children's rights in Kosovo consider that the current state of respect for children's rights is below the desired level. In the Coalition of Non-Governmental Child Protection Organizations (KOMF), they said that the latest official statistics of the Kosovo Agency of Statistics show a very undesired situation for children's rights in Kosovo. According to the data they have collected, over 10 percent of children in Kosovo are involved in heavy work, while close to 7 percent work in extremely hazardous conditions.

So was said by Klevis Vaqari from KOMF. According to her, in the index that deals with child protection, which they published this year, we can see that the Government has done the least for this category. If a rating or score of 0 to 1 is made, which represents the minimum and maximum, for Kosovo's efforts to protect these children, Vaqari said, is 0.1 percent. " Not only are they abused and can also be victims of trafficking, but they are also posed against the potential risk of abuse. They are neglecting children. We can see them at late hours of the night, in the cold, as well as at high temperatures during the summer when they face a constant danger, both for their physical and mental health. They can also be prey or potential victims of physical, sexual, and  psychological abuse, " Vaqari concluded.

In conclusion, we can see that child labor is a cross-continental occurrence, which has mostly come due to poor financial status, or just the lack of proper legislation. As a result, many children aged 5, 8, 10, 12, 14 are forced to work dangerous jobs in miserable condition. Due to these miserable conditions, these children suffer mental and physical harm due to their services, which mostly never paid. These children become unable to join the labor market in the future, as they become unable to work higher-ranking jobs rather than physical work. Nevertheless, what is no note is that countries have to face this issue head on and draft policies and initiatives that can positively affect children and their development in society and in the job market as well.